Wind plant performance declines due to plant age in the United States can be partially managed and is influenced by policy, according to a recent study from the Department of Energy’s Lawrence Berkeley National Laboratory (Berkeley Lab).

The U.S. is currently the second-largest wind power market globally – supplying 7.3% of the nation’s electricity generation in 2019 – yet this is the first research effort to evaluate the impact of plant age on the performance of the U.S. wind fleet. 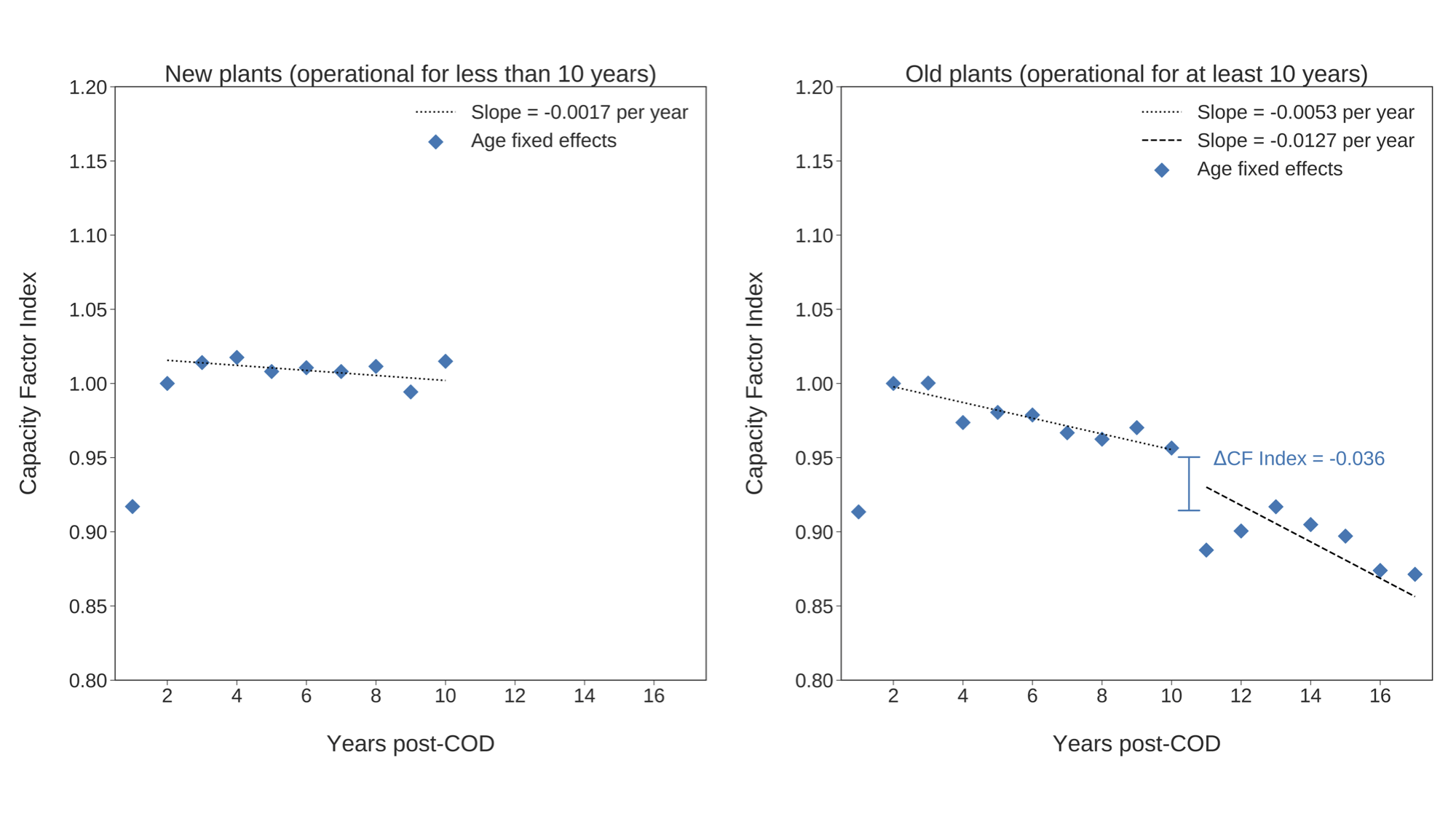 In order to model the projected growth of wind power and determine the financial viability of wind plants, researchers and investors need to take into account wind plant degradation over time. Studies in Germany, Sweden and the United Kingdom have shown that differences in each region’s weather, geography and policies, as well as differences in technology can impact wind fleet performance over time.

The team found relatively little performance decline in US wind plants: they maintain 87% of peak performance after 17 years, and newer plants show almost no decline over the first 10 years. The findings show that the US wind fleet performance decline per year is on the low end of the range found in Europe. The studies conducted in Europe, however, found that performance declined linearly over time, whereas in the US, the degradation does not happen smoothly over time. Instead, Berkeley Lab found a more abrupt change in performance of US wind plants after 10 years of operation, which also coincides with when US wind plants lose eligibility for the production tax credit (PTC).A team of researchers in the Energy Analysis & Environmental Impacts Division at Berkeley Lab analyzed the performance of 917 onshore wind projects in the United States. Their findings were published recently in the journal Joule.

In the US, the PTC was implemented as part of the Energy Policy Act of 1992 to incentivize wind power development and installation. The PTC provides wind plants with a production-based tax credit for their first ten years of operation, and the authors  suggest that the ten-year duration of the PTC impacts the performance degradation rate of US wind plants.

“We hypothesize that after wind plants lose eligibility for the PTC, they may choose to spend less on maintenance overall and their performance may therefore drop,” said Research Scientist Dev Millstein, an author on the paper. “So, a sort of ‘bonus’ effect of the production tax credit policy is that operators may be keeping their plants running at peak performance while the policy is active.”

Understanding that performance decline is influenced by both physical degradation and maintenance cost-benefit trade-offs, which can be driven by policies, is important for modeling wind power costs and energy generation. The research team hopes this study will lead to further analysis and more large-scale data sharing from wind project operators in order to improve knowledge of US wind plant performance, and guide more effective decision-making by industry, academia and policy makers.

Join our webinar “How Does Wind Project Performance Change with Age in the United States?”  on May 20, 2020 at 11:00AM Pacific Time. Register here: lbnl.zoom.us/webinar/register/WN_OLMT7FetT06KIAo4MrwKRQ

Founded in 1931 on the belief that the biggest scientific challenges are best addressed by teams, Lawrence Berkeley National Laboratory and its scientists have been recognized with 13 Nobel Prizes. Berkeley Lab is a multiprogram national laboratory, managed by the University of California for the U.S. Department of Energy’s Office of Science. DOE’s Office of Science is the single largest supporter of basic research in the physical sciences in the United States, and is working to address some of the most pressing challenges of our time. For more information, please visit eta.lbl.gov, lbl.gov and energy.gov/science.