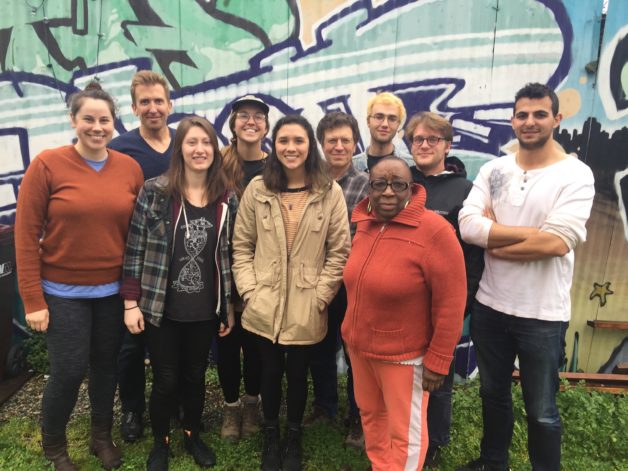 Black carbon, commonly known as soot, is a significant contributor to global warming and is strongly linked to adverse health outcomes. Produced by the incomplete combustion of fuels – emitted from large trucks, trains, and marine vessels – it is an air pollutant of particular concern to residents in urban areas. Sensors available on the market today are expensive, making black carbon difficult to track.

Researchers at the U.S. Department of Energy’s Lawrence Berkeley National Laboratory (Berkeley Lab), collaborating with UC Berkeley, have developed a new type of sensor network that is much more affordable yet capable of tracking this particulate matter. With more than 100 custom-built sensors installed across West Oakland for 100 days, the team created the largest black carbon monitoring network to be deployed in a single city.

A full description of the 100×100 air quality network was published in the journal Environmental Science and Technology.

The project was launched to address a persistent concern in the community: the need for better tools to monitor black carbon across time and space. Expanding on prior research at Berkeley Lab, the team addressed this challenge by building the Aerosol Black Carbon Detector (ABCD). “We generated a technology that didn’t exist to make this invisible problem visible,” said Thomas Kirchstetter, who leads the Energy Analysis and Environmental Impacts Division at Berkeley Lab, and is an Adjunct Professor of Civil and Environmental Engineering at UC Berkeley.

Small and inexpensive, the ABCD is a compact air quality monitor that can measure the concentration of black carbon in an air sample. “We had to create a sensor that was as accurate as high-grade, expensive instrumentation, but low enough in cost that we could distribute 100 of them throughout the community,” said Kirchstetter. Thanks to design innovations that coauthor Julien Caubel developed during his PhD research, which help the sensors withstand changes in temperature and humidity, the ABCD can produce reliable data when left outside for extended periods of time. The materials for each ABCD cost less than $500. In comparison, commercially available instruments that measure black carbon cost many thousands of dollars.

The fleet of sensors was deployed throughout West Oakland, a fifteen-square-kilometer mixed-use residential/industrial neighborhood surrounded by freeways and impacted by emissions from the Port of Oakland and other industrial activities. Six land-use categories were designated for sensor placement: upwind, residential, industrial, near highway, truck route, and port locations. “It was important to build a well-distributed network across the neighborhood in order to capture pollution patterns,” said coauthor Chelsea Preble, a Berkeley Lab affiliate and postdoctoral researcher at UC Berkeley. Through a collaboration with the West Oakland Environmental Indicators Project (WOEIP), Environmental Defense Fund, Bay Area Air Quality Management District, and Port of Oakland, the scientists recruited community members willing to host the black carbon sensors outside of their homes and businesses. “Our partnership with WOEIP, in particular working with Ms. Margaret Gordon and Brian Beveridge, was essential to the success of the study,” said Preble.

To track the individual sensors in real time, including their operating status, and collect measurements, coauthor Troy Cados built a custom website and database. Every hour, the devices sent black carbon concentrations to the database using 2G, the mobile wireless network. The study produced approximately 22 million lines of data, yielding insights about the nature of air pollution on a local scale. Now available for download, the data is also being used by collaborators from UC Berkeley, the Bay Area Air Quality Management District, and other institutions to improve air pollution modeling tools.

How did these devices work? The ABCD pulled air through a white filter, where black carbon particles were deposited. Optical components in the sensor periodically measured the amount of light transmitted through the darkening filter. Black carbon concentration in the air was based on how much the filter had darkened over time. This technique, developed several decades ago by Berkeley Lab and now commercially available, served as a foundation for the innovations in this study.

In West Oakland, the researchers found that black carbon varied sharply over distances as short as 100 meters and time spans as short as one hour. The highest and most variable levels were associated with truck activity along Maritime Street, typically low in the pre-dawn hours when the Port of Oakland was closed and peaking at the start of business, around eight in the morning. The lowest black carbon concentrations in the study area were recorded on Sundays, when truck activity is typically lowest, and at upwind sites near the bay, west of the freeways and the city’s industrial activity. Most of the sensors were able to collect data sufficient to establish pollution patterns during the first 30 days of the study, suggesting that similar – and shorter – studies could provide other communities with valuable information about their air quality.

For the first time, a dense monitoring network recorded black carbon levels across West Oakland, producing hourly averages (a) and daily averages (b). The highest concentrations, shown in red, typically occurred where truck traffic is heaviest, for instance along Maritime Street (west of the freeways, where the sensors above form an ‘L’ shape). (Credit: Berkeley Lab)

Partnering with communities to advance the science of monitoring

“This research is an example of how a national laboratory can have a meaningful impact by working with communities,” said Kirchstetter. “We worked to address a concern that they’ve long had and provided data describing how pollution varies throughout the neighborhood, which can be used to advocate for cleaner air,” he said. The team is currently working to advance this technology, making it more robust and easier to use so that it can be deployed for longer periods of time at other locations.

“We’ve long been involved in the generation of air pollution sensing technologies,” said Kirchstetter, whose mentor, Tica Novakov, started the field of black carbon research and was an inspiration for this work. “Berkeley Lab has experts in air quality and materials sciences, and can further the science of sensors to continue this path forward,” he said. Since the completion of the project, Cados and Caubel have founded a start-up to develop these techniques and make them more readily available.

The authors on this paper were Julian Caubel, Troy Cados, Chelsea Preble, and Thomas Kirchstetter. The study was funded by Environmental Defense Fund, with in-kind support provided by the Bay Area Air Quality Management District.

Founded in 1931 on the belief that the biggest scientific challenges are best addressed by teams, Lawrence Berkeley National Laboratory and its scientists have been recognized with 13 Nobel Prizes. Today, Berkeley Lab researchers develop sustainable energy and environmental solutions, create useful new materials, advance the frontiers of computing, and probe the mysteries of life, matter, and the universe. Scientists from around the world rely on the Lab’s facilities for their own discovery science. Berkeley Lab is a multiprogram national laboratory, managed by the University of California for the U.S. Department of Energy’s Office of Science.

DOE’s Office of Science is the single largest supporter of basic research in the physical sciences in the United States, and is working to address some of the most pressing challenges of our time. For more information, please visit energy.gov/science